Or try a general search... 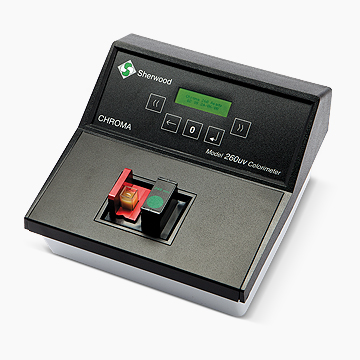 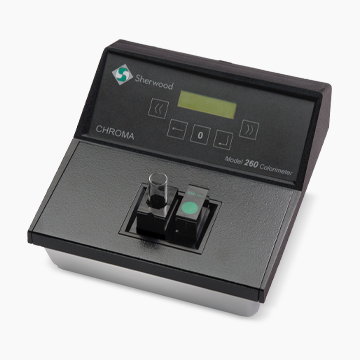 The ability to analyse and quantify colour in aqueous solutions and liquids using a colorimeter is something today’s analyst takes for granted. As a result, some of the fundamental principles of this routine technique are forgotten or overlooked when new analysts come in contact with the technique for the first time. In addition even experienced users may not always appreciate the power and versatility of the technique if they have always used it for the same routine tests; day in day out.

For an introduction to the technique, the practical aspects of the instrumentation and to illustrate just how versatile today’s colorimeters can be, see:

A Guide to Colorimetry

In 2006 the Model 260 replaced the old Chroma 254 & 257 series of CHROMA Colorimeters, developed by Corning, and used extensively worldwide in a wide variety of QA/QC and Clinical Chemistry Laboratories. The optical bench, tried and tested over 35 years, remains the same. To that stable foundation the Model 260 instruments add programmability, and a broader range of functionalities, through use of on-board microprocessor and firmware advances. Up to 100 methods may be programmed and stored by the operator allowing utilisation of most commercially available test kits and user generated reagents. The Model 260 unit allows quick, simple, Absorbance and %Transmission measurements together with more complex Auto-zero, Concentration with Standard Solutions or Factors as well as Kinetic Reaction (Rate and End Point) Methods.

In 2012 the Model 260UV was introduced; with a Halogen light source and detector allowing operation down to 325nm and also a heated cuvette holder; thermostated to maintain sample temperatures at 37°C. These features allow a number of enzyme based diagnostic tests to be performed with an accuracy that matches higher priced analysers and spectrophotometers.

Colorimetric analysis is performed on solutions and as such the sample can only be analysed within a container. The container must therefore be (or made to be) transparent at the wavelength at which the sample is being measured. Sample containers are offered in a variety of forms depending on whether the important factor is sample size, speed of measurement or accuracy. For colorimetric work all containers should be made of glass or clear plastic. The types of container are listed below.

These are made of soda glass. They are individually matched at the Sherwood factory and supplied in matched sets, i.e. each tube in any set has exactly the same absorbance characteristics.  This ensures that once a blank has been measured every sample absorbance readout will be due to the sample only no matter which of the tubes in the set is used.

Various diameter tubes are offered so that the sensitivity of measurement can be varied i.e. if a sample is concentrated (high absorbance values) then measurement in a small test tube is suitable as the light has to travel a smaller distance through the sample leading to lower absorbance values. However, if dilute samples are to be analysed it is necessary to increase sensitivity by offering more sample to the light hence larger test tubes are used.

Each test tube size has a corresponding holder. The holders can also accommodate a square cuvette of the appropriate size; 10mm, 5mm and 2.5mm

Supplied with every Model 260 (not UV) CHROMA Colorimeter. Beware of reusing disposable cuvettes which can become scratched and unusable. They should not be used for any measurement involving light scattering such as Sperm counting as the slightest surface imperfection will ruin the precision of the measurement.

Also made of polystyrene these are used where the volume of sample is restricted, for example, with biological samples. The path length is still 10 mm and can work with sample volumes down to 600µl.

For use with Heated Cuvette Holder they are UV compatible and have a path length of 10mm but can operate with sample volumes down to 400µl.

The most common colorimetric measurements are made in 10 mm x 10 mm cuvettes. These cuvettes are usually 45 mm high and hold 4 ml of sample solution.

These are low cost selection devices which produce or transmit a wide band of radiation usually 20 nm. Fortunately, most colorimetric analyses have a wide absorption band which allows excellent results to be obtained in conjunction with the CHROMA colorimeters.

Coverage of all wavelengths in the visible spectrum is catered for using a set of 8 Polyester filters (252 27 039). However, most colorimeters are used for only one type of analysis and therefore use only one filter.

These are used to select wavelengths more accurately by providing a narrow bandpass typically of around 10nm. The Interference Filter also only absorbs approximately 10% of the incident radiation over the whole spectrum thereby allowing light of higher intensity to reach the detector.

Sherwood supplies a range of Interference Filters and, in principle, any wavelength can be accommodated.